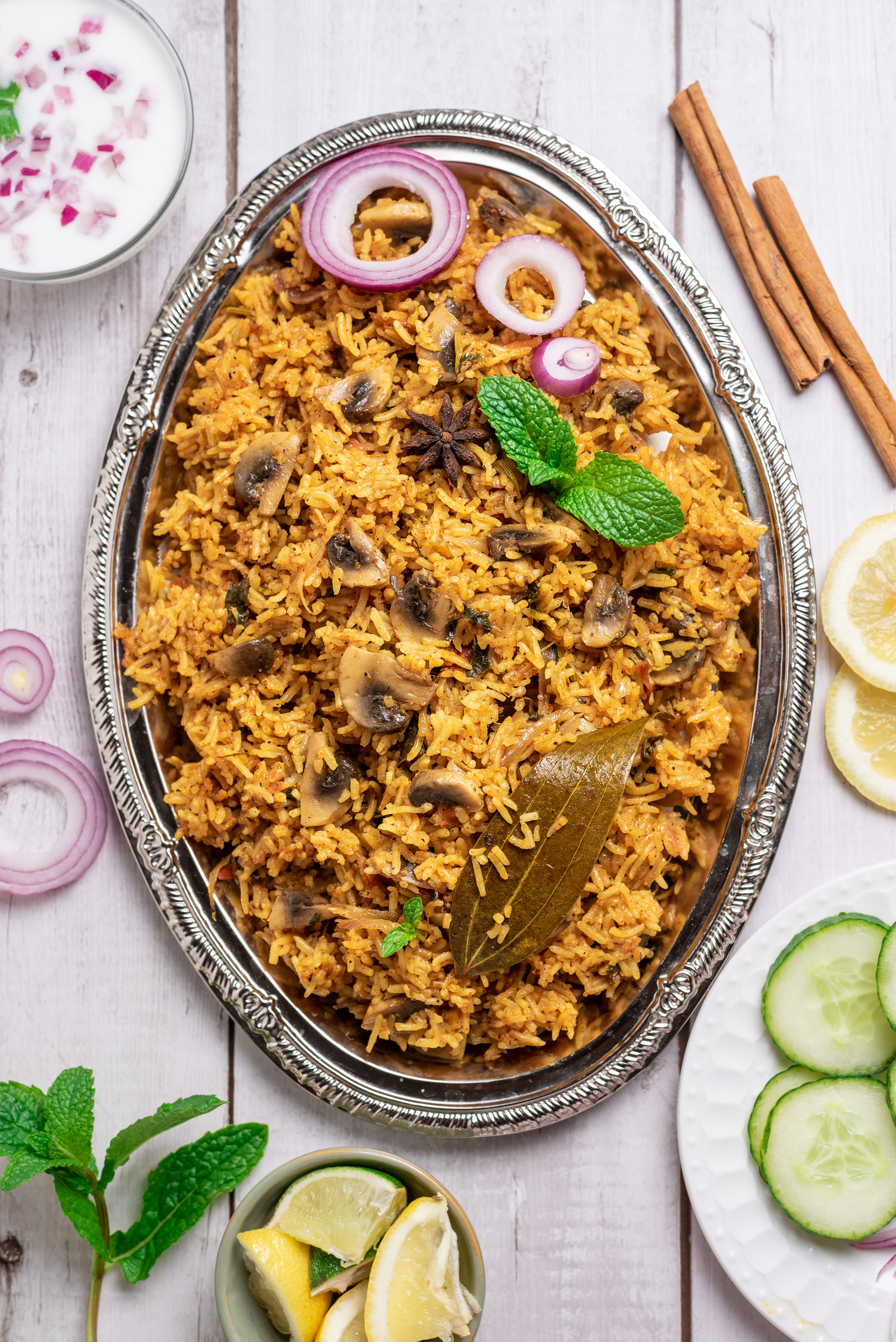 How to pick the right mushroom to cook mushroom biryani

The most common and mild- tasting mushroom that can be easily found at groceries. It works best for the mushroom biryani recipe.

Crimino is a baby Portobello variety and more flavorful than the white button mushrooms. These mushrooms are little darker and firmer and perfect to cook any Indian recipes including biryani. 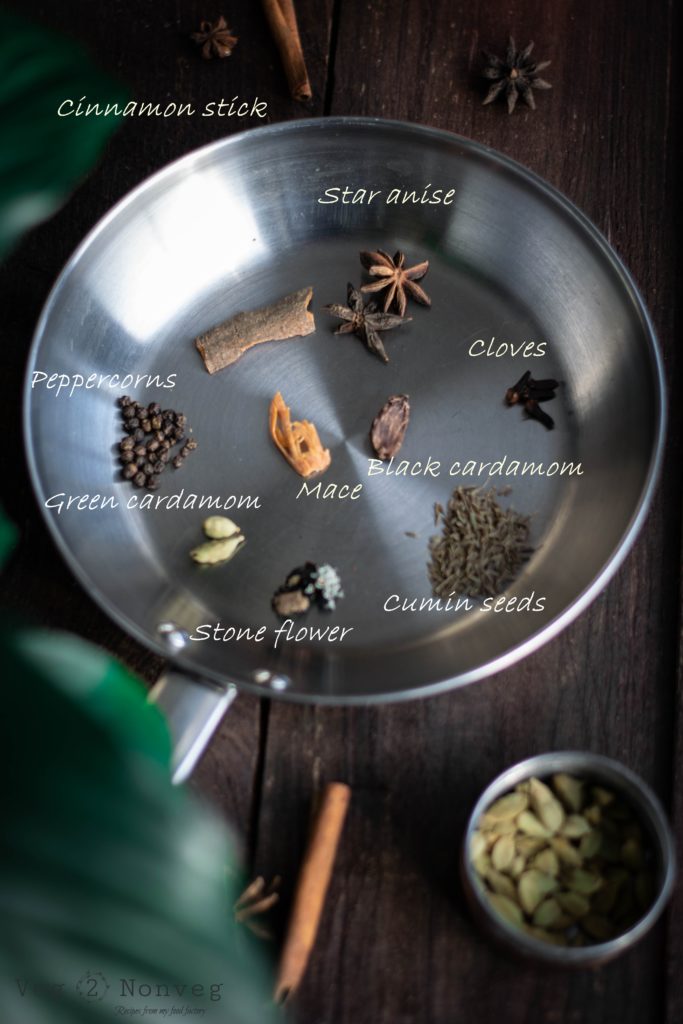 The ingredients to make chettinad biryani masala are:

Dry roast the above mentioned ingredients in low flame and grind them to semi coarse powder. Store the extra biryani masala powder in an air tight container for future use. 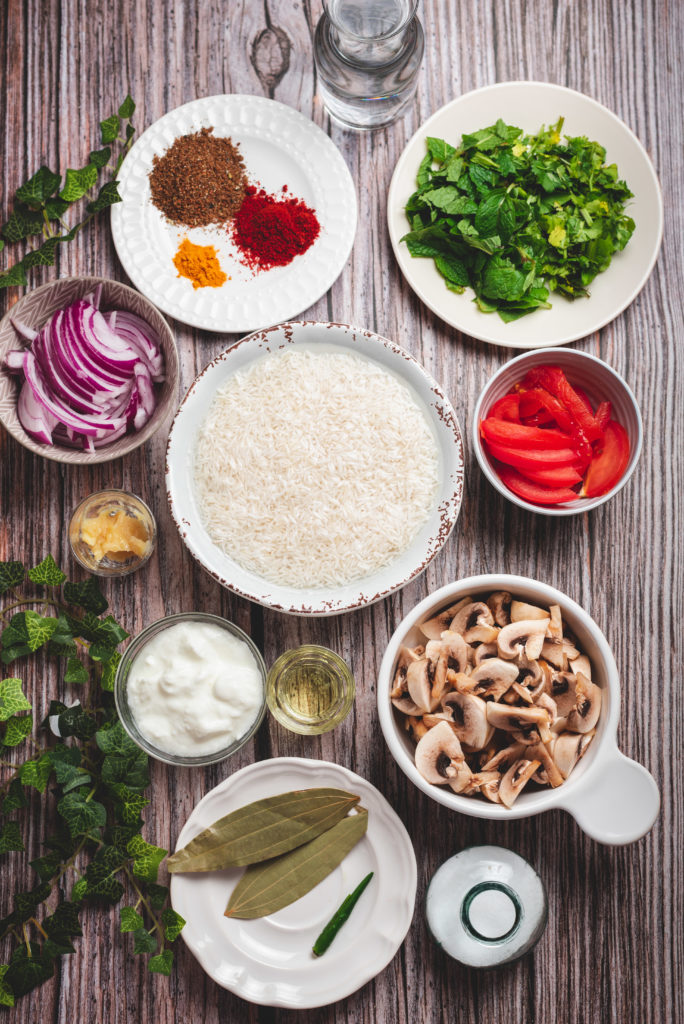 Rice: Basmati rice works the best for biryanis. The water ratio to cook is 1:2 on stove top method, 1:1.75 for pressure cooker method and 1:1.5 for Instant pot method.

Mushroom: I have used white button mushroom for this biryani recipe which have deep flavors. Slice them little thick to use it in the biryani.

Herbs: Mint and cilantro are the two important herbs needed for a perfect flavorful biryani recipe.

Curd: Curd helps to cook the mushroom faster and it gives slightly tangy flavor to our biryani recipe. 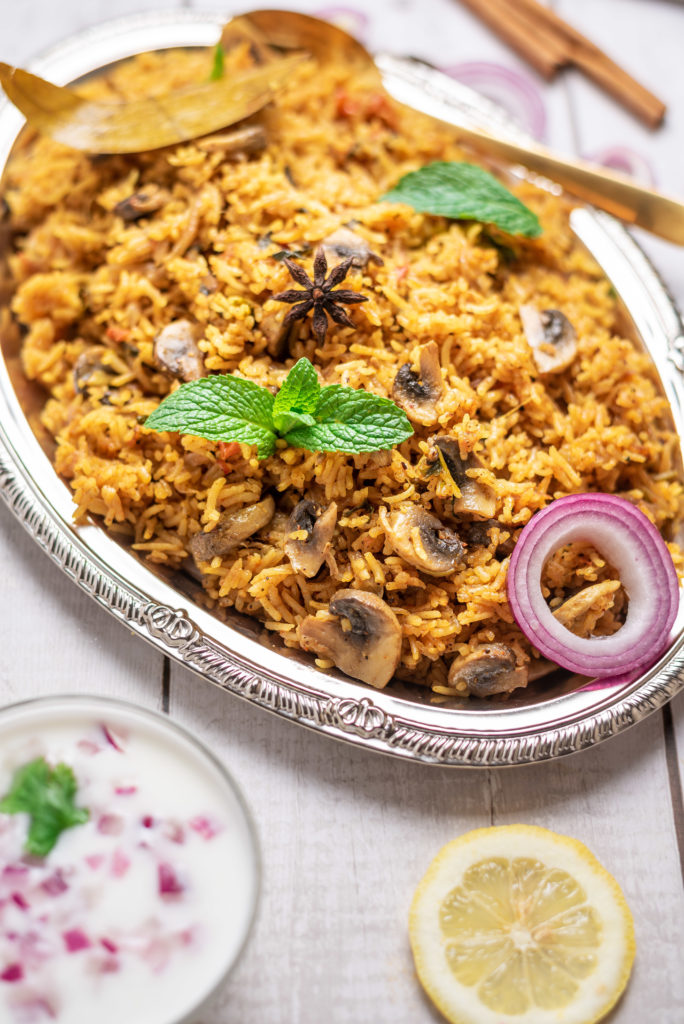 You may also be interested in these biryani recipes

How to make Chettinad mushroom biryani

Let’s see how to make this flavorful this recipe with step by step pictures and clear instructions.

Wash and rinse the basmati rice until the water is clear. Soak the rice for 30 minutes and start making the biryani. 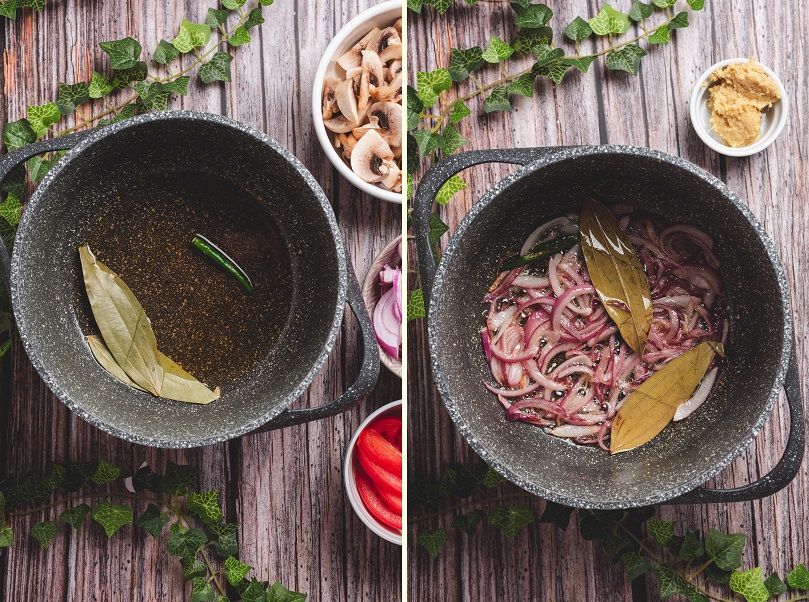 Add the sliced red onions on sauté them until translucent. Add the freshly grounded ginger and garlic paste.

Once the raw smell of the ginger and garlic paste is gone add the sliced tomatoes. Cook them until the tomato turns mushy.

Add the chopped mint and cilantro leaves and sauté for 2 minutes. 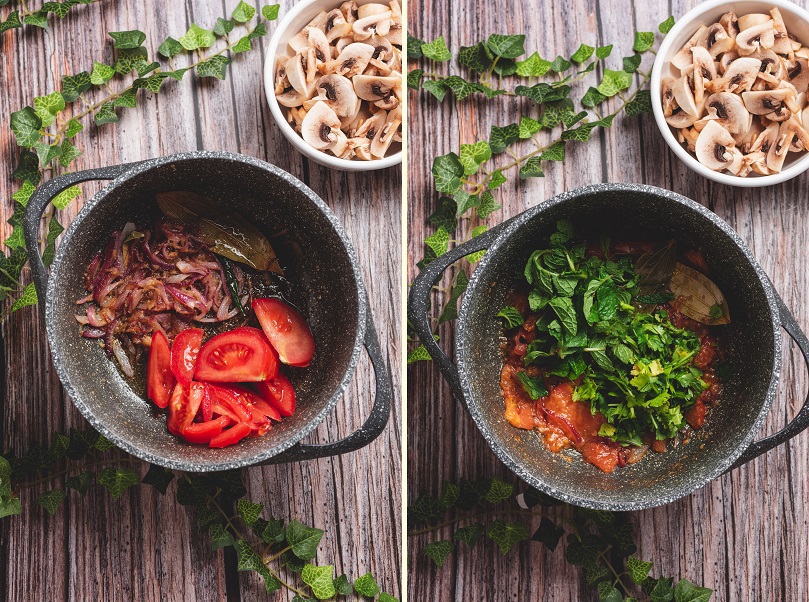 Clean the mushroom to remove the dirt, dry them with the paper towel and slice them to thicker pieces.

Add the sliced mushroom and mix it.

Add the curd and cook until the oil oozes out. It’s the time to add the soaked basmati rice followed by water. Check for salt in this stage; add some more chopped mint and cilantro.

Close the lid and cook on medium flame until the water is absorbed. 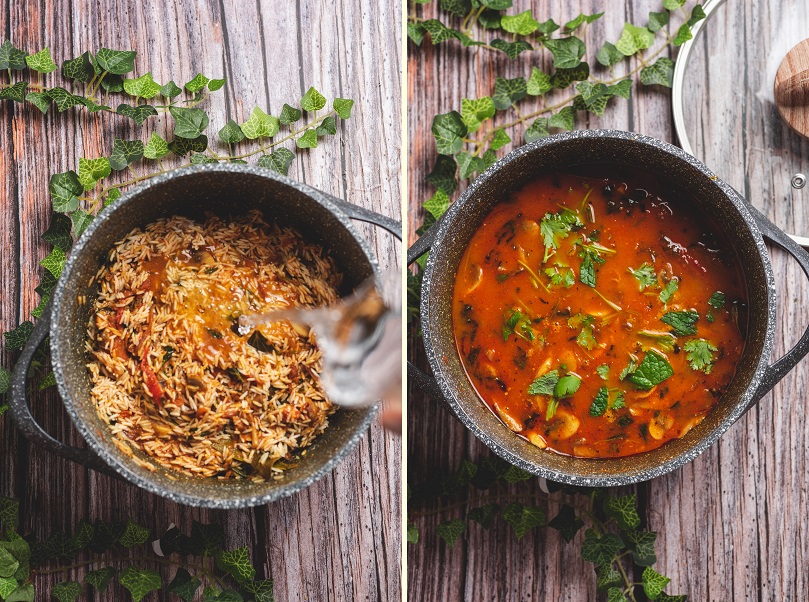 Rest the pot for 15 minutes and then serve the flavorful chettinad mushroom biryani with raita and enjoy! 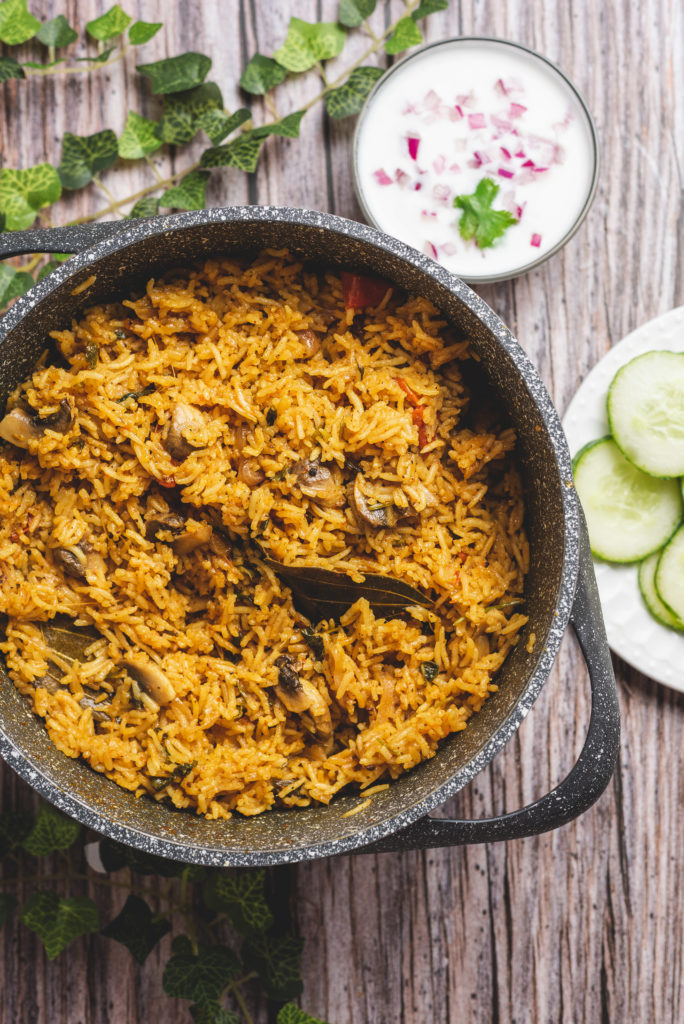 If you tried this Chettinad mushroom biryani recipe let me know how it turned. Take a picture and tag me @veg2nonveg_kitchen on Instagram with the hashtag #veg2nonvegkitchen. I would love to see your creation.

Below is the printed version of the mushroom biryani recipe! 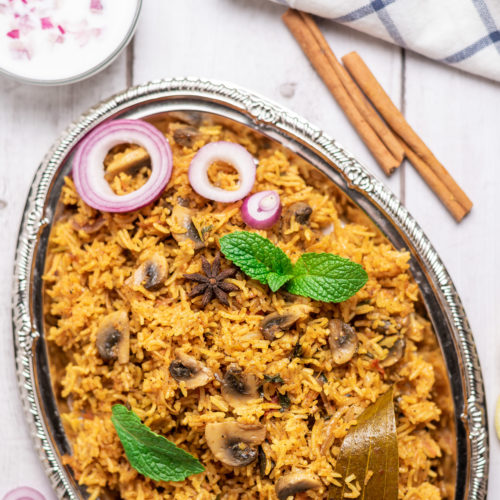 Some more chettinad recipes you may be interested to try: 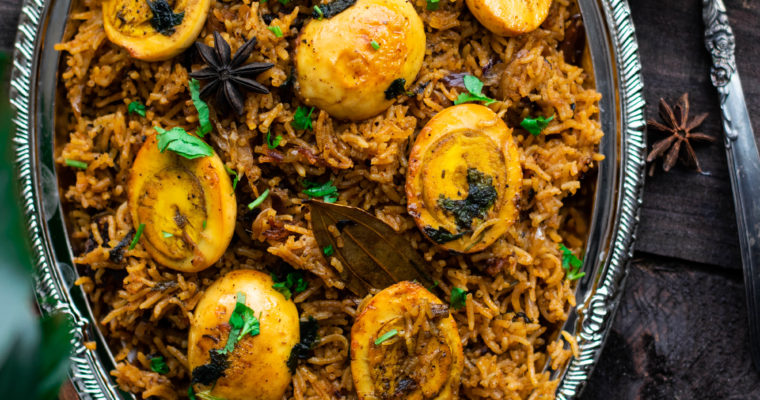 Chettinad Egg Biryani is a flavorful biryani made with exotic Chettinad spices, rice and eggs. I am sure most of us like Biryani 🙂 Our weekends are incomplete without biryani. We mostly make biryani for our Sunday lunch. There are different types of biryani and […] 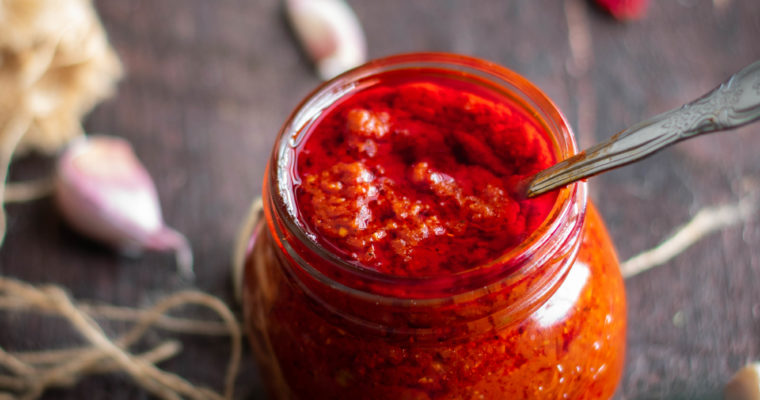 How to make Schezwan sauce

Schezwan sauce is a spicy garlicky Indo Chinese sauce really easy to make, usually Schezwan sauce are served with momo dish, cutlets and spring rolls. This is a spicy hot sauce which is perfect for noodles and rice which takes the dish to another level. […]